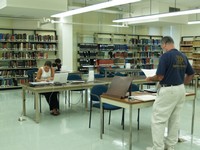 Researchers will find that working in an archives differs from working in a library. Records are arranged mostly by the agency, organization or individual that created them, rather than by subject. Descriptive inventories in the form of finding aids for government records and manuscript collections can help you navigate these records.

Indexes and catalogs for certain records, the library, photograph, maps and artifact collections are available in the Archives reference room.

Archives collections (maps, library, some photographs) and summary of finding aids are cataloged online.  To see the online catalog, click on “Library and Map Catalog” link on our home page under Research Our Records..

Administrative Rules governing the use of Public Archives describes current rules and procedures that must be followed when visiting Hawai‘i State Archives.