REMEMBER TO CHECK OFF $3 ON YOUR STATE TAX RETURN

The Hawaii Campaign Spending Commission operates from a trust fund called the Hawaii Election Campaign Fund.  This fund depends on Hawaii taxpayers checking off the box on their state income tax form which permits $3 from state funds (or $6 if married and filing a joint return) to be allocated to our trust fund.  Tax filers are informed that participation is voluntary and does not increase their tax or reduce their refund.  Monies in this campaign fund help to provide accountability, transparency, and integrity by providing public funding to candidates as well as pays for the operational expenses of the Commission.

With the assistance of, and in partnership with, the Common Cause Hawaii, we would like to increase the revenue coming into the trust fund this tax season.  As such, we will be embarking on an awareness campaign with promotions that will look like this:

By marking the $3 “Yes” checkbox for the Hawaii Election Campaign Fund, you support
the work of the Hawaii Campaign Spending Commission. The Commission serves Hawaii
voters by helping to ensure that:

Please help us by passing our message on to friends, families, and others.

The next report due for Candidate Committees and Noncandidate Committees is the Supplemental Report which must be electronically filed on your respective filing system no later than 11:59 p.m. Hawaiian standard time on February 2, 2015.

Pursuant to HRS §11-327, the 13 ballot issue committees that have registered with the Commission for the 2014 election have until Monday, February 2, 2015 to terminate their registration with the Commission and return all surplus funds to contributors or donate the funds to a community service, educational, youth, recreational, charitable, scientific, or literary organization; otherwise, the surplus funds shall escheat or be forfeited to the Hawaii Election Campaign Fund.  For more information, please see the memo posted on our website.

The new reporting schedules have been posted on our website and are provided via the link below for your convenience to track upcoming reporting deadlines:

These reports must be electronically filed on your respective filing systems (i.e., candidate filing system (CFS) and noncandidate committee filing system (NCFS)) no later than 11:59 p.m. Hawaiian standard time on the day of the deadline. Failure to file any of these reports by the deadline will result in a fine and, if you are a candidate committee, posting of your committee’s name on the Commission website under “Committees That Failed to File or Correct a Report.”  Moreover, if a fine is assessed against your committee and you fail to timely pay it, Commission staff will issue a complaint against your committee and set it for consideration at the next public Commission meeting.  Be advised that at this meeting it is very possible that a higher fine may be assessed.  Therefore, we encourage all committees to timely file their reports and pay any fines.  As a reminder, the reporting deadline is always a few days after the reporting period is over so you can always file the report early to avoid any penalties.

Updated 2016 and 2018 Election Period dates for candidates that ran in the 2014 election are available by clicking here.  The two or four-year election period for a candidate seeking office in the 2016 or 2018 election is the period that contributions to a candidate must be aggregated and not exceed the $2,000, $4,000 or $6,000 limit set for the office you plan to seek.  This information can also be shared with contributors to your candidate committee.

PROPOSED LEGISLATION FOR THE 2015 LEGISLATIVE SESSION

For the 2015 legislative session, the Commission has submitted one measure to the President of the Senate and the Speaker of the House for introduction.  Senate Bill 452 and House Bill 175 seeks to amend HRS §11-334(a)(4) to require supplemental reports to be filed by candidate committees on January 31st regardless of whether it is an election year or not.  This comports with present practice as well as conforms this requirement with noncandidate committees.  This proposal has been submitted for consideration multiple times but continues to get deferred by the State legislature.

TERMINATION OF COMMITTEE REGISTRATION WITH THE COMMISSION

If you are a candidate who does not anticipate running in a future State or county election, or you are a noncandidate committee that does not intend to participate in future State or county elections, and your committee has no surplus or deficit in campaign funds, you may want to consider terminating your registration with the Commission.  If so, you will need to complete and submit the following documents:  (1) A Request for Termination of Registration form for candidate committees or a Request for Termination of Registration form for noncandidate committees; and (2) A closing bank statement verifying that your committee’s bank account(s) have been closed.  Further, you must not have any outstanding fines or unresolved matters with the Commission.  Assuming everything is in order, the Commission will approve your termination request and you will no longer be required to electronically file reports with the Commission.

Recently, the Commission launched two new data visuals in the Candidate Data Visualization App and one new data visual in the Noncandidate Committee Data Visualization App.  When you select a candidate in the candidate app, you can view a new pie chart entitled “Expenditures By Authorized Use” which illustrates what percentage of spending was for the eight authorized uses of campaign funds (i.e., expenses that are directly related to a candidate’s campaign, charitable donations, public school or public library donations, full-time student scholarship awards, two fundraiser tickets to another candidate’s fundraiser, political party contributions, ordinary and necessary expenses related to the office of an elected official, and mixed benefit expenses). 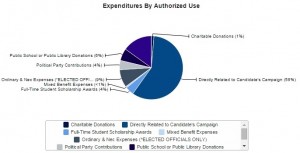 The other new chart entitled “Fundraiser Notices” illustrates fundraisers on a grid by fundraiser dates and amounts, and it includes information on the fundraiser location and the name of the person in charge. 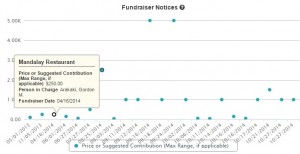 SUMMARY OF THE 2014 ELECTION

With respect to the 298 candidates who ran for 102 (out of 128) seats in the State of Hawaii, a total of $21 million was raised and a total of $19.8 million was spent.  Click here for more information and statistics including breakdowns, top 10 lists, and cost per vote information.

With respect to the 29 Super PACs registered with the Commission, in the 2014 election, the Super PACs raised a total of $7.9 million and spent a total of $7.3 million.  Of the moneys spent, $1.9 million was for positive advertising (i.e., in support of a candidate) and $3.3 million was for negative advertising (i.e., in opposition of a candidate).  Click here for more information and statistics.

With respect to the 13 ballot issue committees registered with the Commission, in the 2014 election, there were 12 ballot issues of which only 3 had campaign finance activity.  These committees raised a total of $13.5 million and spent a total of $12.5 million.  The most money raised and spent was for the Maui County question relating to genetically engineered organisms (i.e., $11.1 million raised and $10.2 million spent).  Click here for more information and statistics.

PUBLIC FUNDS DISBURSED IN THE 2014 ELECTION

The Commission’s Annual Report for fiscal year 2014 has been posted on our website.  View the FY 2014 Annual Report.

Mahalo to everyone who responded to our online survey.  The results have been posted on our website.  View the 2014 On-line Survey Results.

Links to subscribe to our e-blasts and to receive our Facebook posts and/or tweets are available by clicking here: Facebook, Twitter, Email.  If you are not a member of Facebook and/or Twitter, you can still view our posts and tweets because they have been placed in the public venue for all to enjoy.

Commission meetings for 2015 are scheduled for the 2nd Wednesday of each month (unless otherwise noted) at 10:00 a.m. in Conference Room 204, Leiopapa A Kamehameha Building, 235 S. Beretania Street, Honolulu, Hawaii 96813.

View the Commission’s 2015 Meeting Schedule and Minutes for meetings held through December 2014.