“…The office that was held by my Guardian until her departure, now belongs to my Mother from Hawai‘i to Kaua‘i…”

“…I make it known to you; the office which my mother held until her departure, is now mine. All her active duties and her authority are committed to me. The tabus of the king, and the law of God, are with me, and also the laws of the King…” Kīna‘u 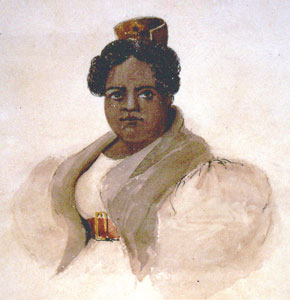 Kīna‘u succeeded her aunt Ka‘ahumanu upon the latter’s death in 1832.  Her term of office was marked by discord as the young King Kamehameha III, her half-brother, struggled with her and the chiefs for political power. She was responsible for enforcing Hawai‘i’s first penal code, proclaimed by the King in 1835.

Kīna‘u became a Christian in 1830, and was involved in the persecution of Hawaiian Catholics and attempts to expel French priests.  This contributed to a diplomatic confrontation with France that threatened Hawaiian sovereignty.

Daughter of:
Kamehameha I and Kaheiheimālie (w)